I use NSR to recondition the marble in my guest rooms and have nothing but good things to say about them and the quality of work they provide.

I am very impressed with Jeff Keenan, his crew, their professionalism, and dedication to detail. I would highly recommend them for any stone care needs. 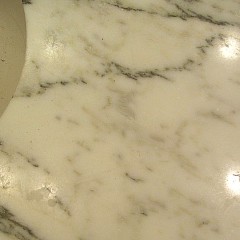 I wanted to send a quick note of sincere thank you for doing such an amazing job on the cleaning, polishing and sealing of the stone throughout my home. The finished results are fantastic. The colors in the stone seem so much more vibrant, defined and enhanced after your services.

The ninety-five square feet of granite in the kitchen, the marble in the powder room and the duel granite vanities in the master bathroom; all different stone, all turned out beautifully.

You were professional, easy to work with, clean, neat and I believe your price was fair. I would not hesitate to recommend your company and services to my friends, co-workers and family.

I wish you continued success and I will certainly contact you when it is time to give the stone in my home a “day at the spa” with Natural Stonework Restoration, LLC. 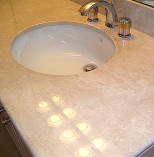 Jeff has done work at my house to restore and seal my Marble and Granite countertops and back splashes. I have found his work to be top rate. He is always on time, very neat, and does a marvelous job. 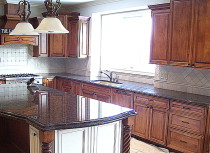 I recently had my granite countertops cleaned sealed and polished by Jeff Keenan.  I was impressed with his knowledge and expertise in caring for this beautiful stonework.  Jeff was most helpful in explaining the process and then spending the time to get my stonework looking like new again.

I was surprised at the difference!  Jeff was also helpful in answering questions about some of my other stone surfaces and I felt like he was someone that was educated on the subject and one that I could trust.

I would certainly recommend Jeff and Natural Stonework Restoration to anyone who is considering having their stone cleaned or restored.

I just wanted to thank you for the stone work you recently provided. The finished result was fantastic! Your knowledge of stone was enlightening and valuable.

It was refreshing to see someone who really had a passion for their work. In our business now you tend to get companies that are more concerned about the number and less about the detail. Your attention to detail with a fair price is valued and appreciated. Best of luck with your upcoming projects and I’m sure I’ll be in touch. 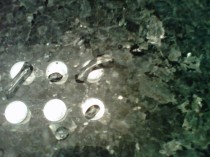 Water beads up after sealer is applied. Sealing protects liquids from penetrating & staining your stone.

Jeff Keenan of Natural Stonework Restoration, cleaned, sealed and polished our granite in April 2012. What an excellent job he did! The water is beading up on the surface beautifully.

Our granite is mostly black, which is very reflective, so the shiny surface is noticeable. When he finished, it was like glass. He did some recaulking behind our kitchen faucets, that was looking unsightly, and replaced it with black to match our granite, without being asked to do so.

There was no mess left behind, and he was delightful to work with- respectful and professional. We have recommended Jeff and Natural Stonework to our friends.

I contracted Natural Stonework Restoration to do repair work on the granite surfaces in my home. This repair work involved tightening up several joints that were spread as much as ¼” in some seams.

Previously, over the last nine years, two different contractors came to my home including the people that installed the granite originally and were unable to do even a decent job. NSR came to look at the job, studied it and said they would be back in one week. They came back in one week, worked for nine (9) hours straight, disassembled some granite, leveled it, brought the joints to within 1/16”, epoxied them to match the existing color and produced an almost flawless seam in the end. These particular seams were approximately 2 ½’’ long and I couldn’t have imagined a better job being done by anyone.

After fixing the two seams involved, they proceeded to clean, seal and
polish the entire kitchen, including an island approximately 3’ x 8’, the bar area in another room and several other surfaces throughout the home. I could not be happier with the job these two men did. They went way above and beyond what was expected and were extremely professional. I would recommend them very highly to any individual, company or corporation that expects an absolutely quality performance.

Servicing
all of
Michigan! 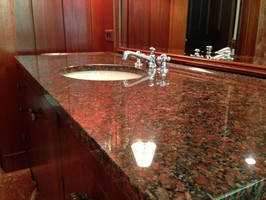 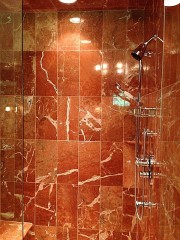 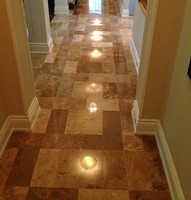